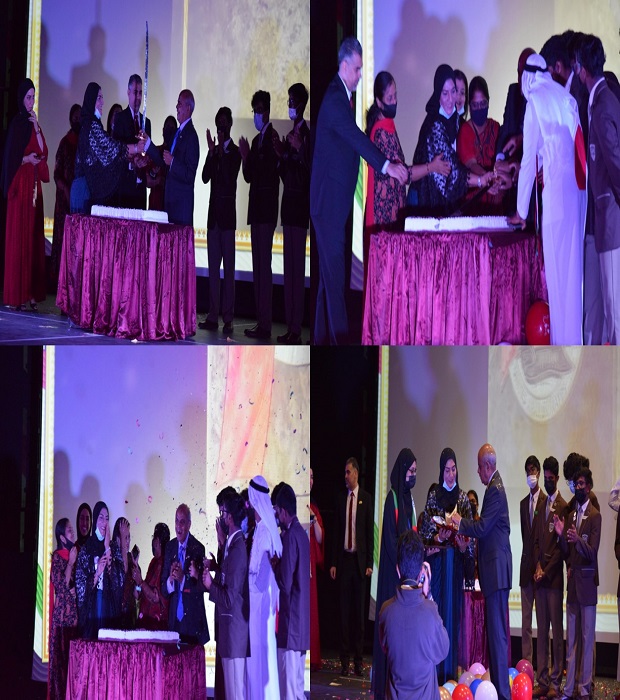 National Day - Year of the Fiftieth

Long live the Nation ! Long live the UAE, the Sheikh Zayed Multipurpose Hall resonated with these words on 29 November 2021, as OOB celebrated the Year of the Fiftieth. The event to celebrate the momentous occasion involved nearly 149 students from across the Departments as the culture and traditions of the UAE were on ample display with an array of traditional songs and dances. The Seeds of the Union enactment  and the multi lingual song eulogizing HH Sheikh Khalifa bin Zayed Al Nahyan , President of the UAE, ruler of Abu Dhabi and the Supreme Commander of the UAE Armed Forces were indeed highlights. ‘ Golden Hues’ – a compilation of articles , poems   in English and Arabic along with photographs charting the meteoric rise of a nation that achieves the impossible and believes in the beauty of its dreams was released by the Principal and CEO , Mr. Srivalsan Murugan in its signature edition. Indeed the pomp and gaiety of the show impressed one and all amongst them parents who were present in large numbers. The event was also live streamed to reach a wider audience . The stellar efforts of the team headed by Ms. Samira Al Balushi , Supervisor Arabic and Islamic Studies won rave reviews. Here is to the next Fifty!