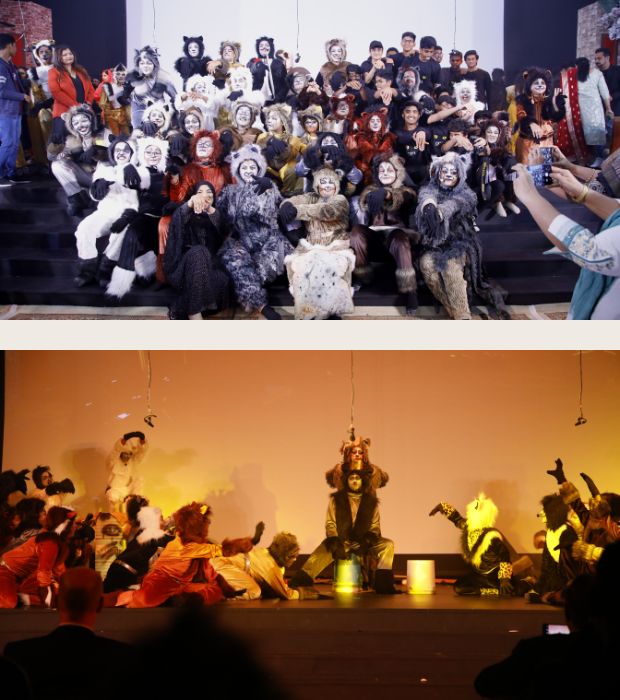 Our Own English High School, Sharjah Boys staged its annual concert, the ageless musical- Cats on 7 December ,2022 to rave reviews. Indeed an ‘our own’ adaptation, it introduced the audience to the world of the Jellicle cats who possess diverse personalities along with displaying stupendous theatrical talents. The musical was a Sherlockian journey to unveil a feline murder mystery. The production won the hearts of one and all for its mellifluous and mesmerising singing, powerful histrionics by the young thespians, rhythmic and nimble dance steps, the breath-taking costumes that lent life to the characters, the eye-catching props, the true to life ambience  and the tech team with their phenomenal work raising the standards of production to newer heights. The show was attended by Mr. Nicholas Horsburgh acclaimed author, educator and educational consultant, along with his wife, Mr. Michael Guzder, Senior Vice President – Education (GEMS Education) Mr. Jonathan Bramley Vice President Communications- GEMS Education, Mr. Johannes Bodenstein, School Improvement Advisor – SPEA, Mr. Suleiman Hamdan, School Improvement Advisor – SPEA and other eminent guests from the GEMS fraternity .  The show stopper dance was performed by the alumni leaving the audience asking for more. The 14 th edition of the Annual Concert was truly a testament of team work as nearly eighty six students and forty one staff collaborated to transform the’ meowsical’ the talk of the town in a time span of twelve days.